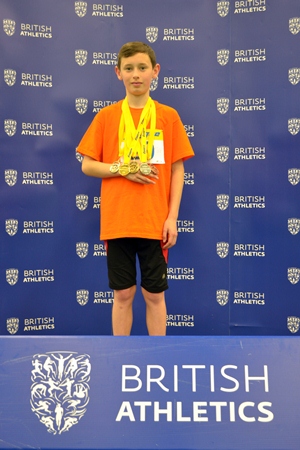 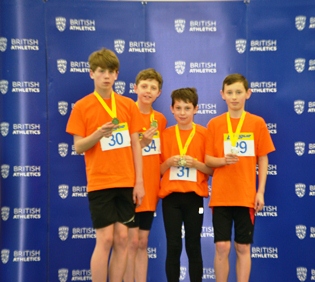 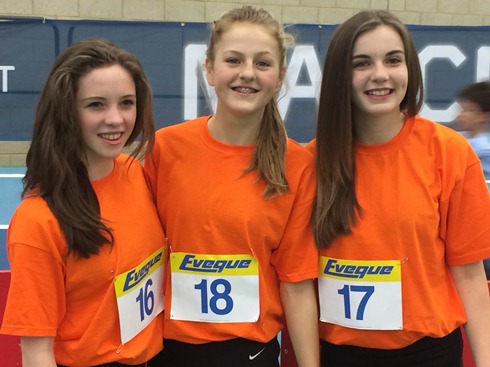 Fantastic news from the Nationals over the weekend, including a newly crowned National Champion from our Club – Jack Williamson who now joins only three other athletes from the Club who have achieved a National title in the past. Well done Jack.

Our ten athletes from the Club had the honour of representing the North West at the UK Sportshall final at Sportcity Manchester over last weekend. The under 13 boys and under 15 girls had earned their place by winning the Regional final earlier in the year competing alongside team members from other clubs in Cheshire. The under 13 boys team came 7th  and included Elliott Thomason, Jack Williamson, James Puttick, Jordan Sides, Kian Nolan, Marcus Grayson and the Under 15 girls team came 8th and included Abbie Whelan, Cara Gibbons, Eve Fenoglio and Liberty Hughes. The athletes all performed brilliantly against strong opposition from all round the country.

Top performer of the day was Jack Williamson who became the National speedbounce champion with 92 bounces in 30 seconds and was only one bounce off the national record which had stood since 2006. Jordan Sides won a silver in the speedbounce and was only six bounces off the National record. The Obstacle relay team including Jack Williamson, Kian Nolan and Marcus Grayson won a silver medal. The under 15 relay team including Abbie Whelan, Liberty Hughes and Eve Fenoglio narrowly missed out on a medal coming 4th.

Well done to everybody who took part at the highest level of sportshall competition in the UK. Thanks to Wendy for the story and Ian and Melanie for the photos