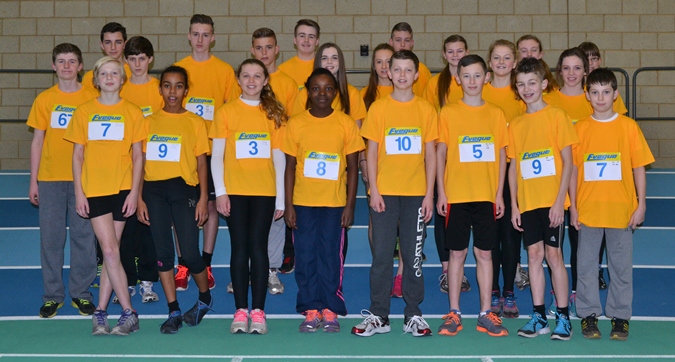 The Regional Sportshall Final was held at Sportcity, Manchester on 15th March

Twenty one Crewe and Nantwich athletes were chosen to compete alongside athletes from West Cheshire, Halton and Frodsham and Macclesfield as a Cheshire team at the Regional Sportshall Final. They competed against athletes from Greater Manchester, Merseyside, Lancashire and Cumbria. The under 13 boys which included Max Beeston, Jack Williamson, Marcus Grayson, Elliott Thomason, Jordan sides and Kian Nolan and under 15 girls teams which included Eve Fenoglio, Abbie Whelan, Liberty Hughes and Cara Gibbons won, which earns them the right to represent the North West at the Uk Final in April. The under 13 Girls team which included Loiuse Elleray, Lavinnia Mottershead, Eve Heaword, Tia Campbell, Ruka Shonibare, Beth Linder –Arrowsmith and Caitlin Britton plus the under 15 boys team which included Jack Shenton, Matthew Williamson, Lewis Palin, Frank Roe and Josh Stubbs both came third. Star of the day was Liberty Hughes who won the under 15 all-rounder title where athletes have to run jump and either speedbounce or throw.  Max Beeston also achieved 3 golds.

These athletes have all done so well at the North West Sportshall League competitions to qualify them to represent Cheshire.

This has been a difficult year for Sportshall Athletics due to loosing sponsorship funding, but we are glad that the UK final is going ahead.