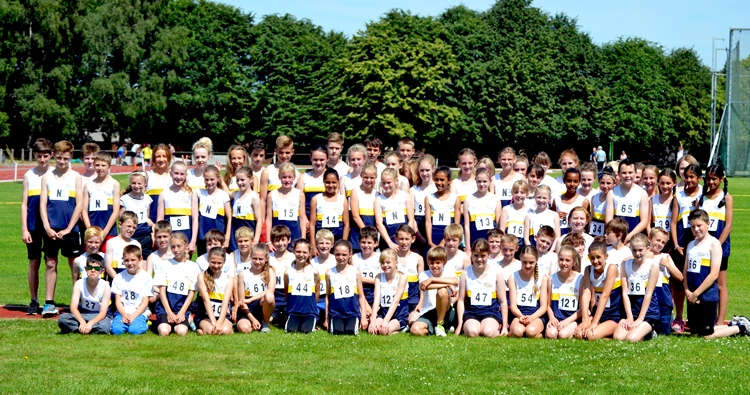 The Club made league history recently by winning the Cheshire Track & Field League titles for Men (U13 to Senior), Women (U13 to Senior) and Overall Men & Womens (U13 to Senior) for the eighth year in succession. No Club in the twenty year history of the League has had so much winning success. The Cheshire League sees eighteen clubs including Vale Royal, Halton & Frodsham, West Cheshire and Macclesfield from Cheshire; Deeside, Colwyn Bay, Wrexham and Menai from North Wales and Salford, Sutton St Helens, Stockport, Altrincham, Bury, East Cheshire, Handforth, Manchester Harriers and Trafford from Greater Manchester compete across all age groups in four track and field fixtures throughout the summer season. Our Club showed tremendous determination throughout the season to retain its titles. The Club won nearly all its fixtures and with a strong turnout in the final fixture at Macclesfield in September sealed the victories to keep the shields and trophies for another year. Our U11's performed brilliantly to come a close second to Macclesfield – who we congratulate for winning the title and retaining it in Cheshire.

The Committee extends congratulations to the 150+ athletes who took part this season and a big thank you to all the team managers and assistants, coaches at the Club for preparing the athletes, our officials helping at the fixtures and all the mums and dads for supporting their children. More photos coming soon from the last fixture at Macclesfield courtesy of Ian.