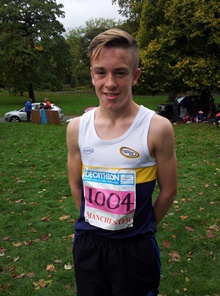 Well done to Josh Betteley, whose pictured here after his win in the first of the Manchester League Cross Country races at Heaton Park. Josh went as a guest runner not really knowing how he'd do as he's not done this league before, but he won in spectacular style finishing 10 seconds ahead of the second place runner. A great result for Josh and the Club as our colours are seen performing further afield.