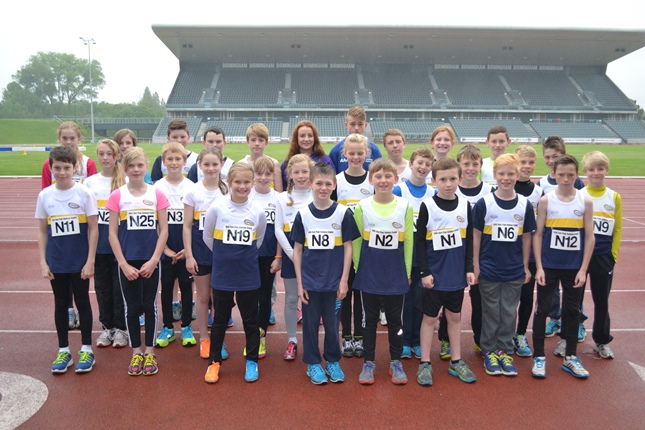 What a great day it turned out to be on Thursday at the latest instalment of the Tom Pink Relays, our U11 & U13's teams took part with Relays and a new Med-ball challenge being introduced. Both age groups had a fantastic day with them taking home medals.U11 girls team of Molly Newton, Rosie Meakin, Olivia Fowler, Roisin Selby & Esther Wilding took Bronze in the 5×100 Relay & U13 Girls team of Amelia Atkinson, Eve Heaword, Jenifer Palin, Caitlin Britton & Matilda Hargreaves took Bronze also in the 5×100. In the Boys the U11 Team of Sean Sides, Liam Prestwich, Ben Basten, Sam Burgess & Ben Jackson had a fantastic race and took Gold in the 5x100m Relay what a Race! & the U11 Team of Sean Sides, Sam Burgess & Liam Prestwich took a memorable Silver in the 3x500m race. In the U13 boys Jordan Sides, Daniel Joy, Jack Williamson, Chris Malkin & Thomas Jackson Took Silver in the 5x100m while the Team of Jordan Sides, Jack Williamson & Peter Selby took Bronze in the 3x500m Relay. Well done to all the other relay teams who took part on the day 29 athletes took part overall. In the Med-ball challenge there were individual & Team medals which had to have teams of 5 or more with the top 5 from each team getting a team medal with the U11G Team of Olivia Fowler, Molly Newton, Rosie Meakin, Roisin Selby & Esther Wilding taking the Bronze Team Medal, U11 Boys team of Sam Burgess, Liam Prestwich, Ben Basten, Archie Pordes & George Spain took a Team Bronze with Sam taking Individual Silver & Liam gaining a Bronze Well Done!. U13G Team of Caitlin Britton, Amelia Atkinson, Matilda Hargreaves, Eve Heaword & Lauren Roe took Team Bronze while the U13B Team of Jordan Sides, Marcus Grayson, Jack Williamson, Daniel Joy & Ethan Hall took Bronze thanks all the Athletes who took part in both events, the Team managers officials and volunteers who all came a made it a memorable day to remember at the Alexandra Stadium Birmingham.

Thanks to Paul for the story write up and thanks to Ian for loads of fantastic photos of the day. Take a look in the PHOTOS section click here. Don't forget you will have to be logged in as a member to view them.